When your child joins us at Shepherd’s Hill Academy, they will go through our 4-stage Equine Relationship Therapy (ERT) Program. This process helps your child discover horsemanship skills, soft skills, communication skills, and more in order to grow and thrive. The program also aids students in transferring these skills into their real-life relationships.

A key element to this therapy’s success is the work your child will do with the same horse over 12 months. This helps your student to learn the personality, character traits, and quirks of the horse of their choosing. It will be challenging, frustrating, and rewarding!

Because this relationship between your child and their horse will be so important, we want to give you the opportunity to get to know our horses as much as possible before your time here. You will discover the elements of each horse that make them unique. Like humans, you will learn more about the personality traits, attributes, likes, and dislikes of each individual horse.

Shepherd’s Hill Academy is currently home to 12 unique horses. Read more about each of our horses and their personalities in the bio section below. 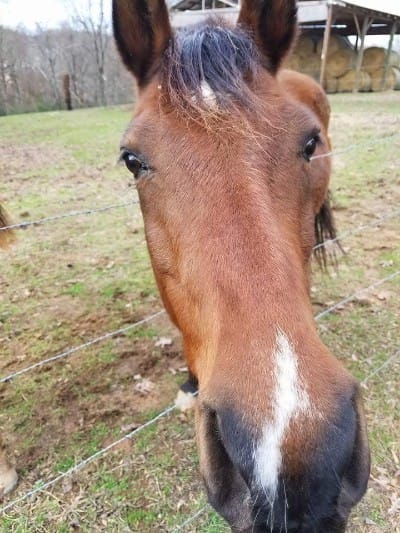 Falcon is a blood bay Arabian with a tad of Saddlebred in there. He is a 17yr old gelding. He came to us from an owner who could not ride anymore and wanted him to be used and loved. He’s a very accomplished, well-educated guy who feels it’s his duty to explain things to the students in Equus (horse speak). He’s picky and opinionated, but very sweet.

Likes: To be heard by his partner and asked to do things.
Dislikes: Incorrect cues, being disrespected, and bossed around. Falcon can be passive aggressive if his feelings are hurt. 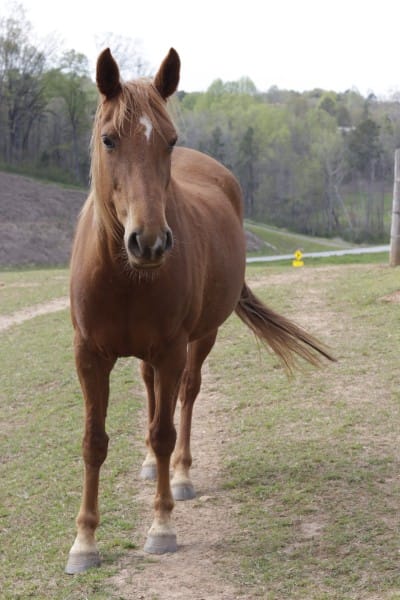 Gracie is a 7-year-old American Saddlebred/Arabian chestnut mare and is the mother to Valor, our youngest herd member. Gracie is empathic and sensitive. She always tries her best with her students, but sometimes gets distracted by her own feelings and outside influences. She’s from out of town – Kentucky bred.

Likes: People and being right.
Dislikes: Not having things explained clearly and being the last to get her food. 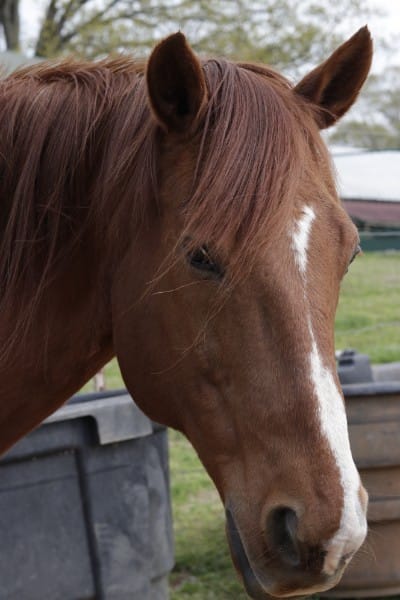 Jack is a 20-year-old chestnut Quater Horse gelding who has the moves. Jack is inquisitive, very people oriented, and loves to show what he knows. He also likes to herd people like cattle if allowed. Although Jack is a sweet, reliable dude, he can get sassy if the boundaries are not clear and he feels unsafe.

Likes: Playing with his students and his horse friends like he’s a youngster and escaping any halter anytime he wants too.
Dislikes: Lack of clear direction and guidance from his students. 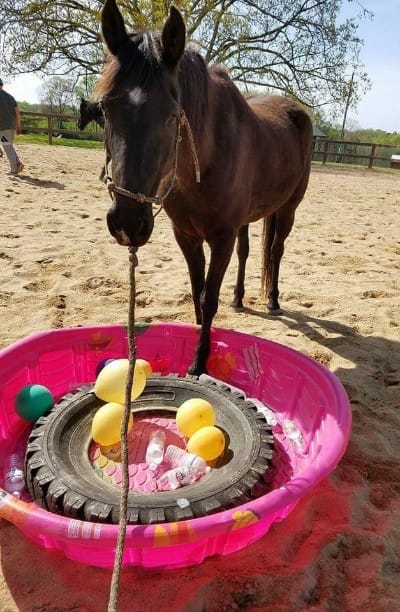 Jasper is a black Arabian/Paso Fino cross gelding around 13 years old, belonging to Ms. Jayne Wilson. His big brother (from another mother) is Levi. He is a clever little fellow, but sometimes lacks courage (which he relies on his students for). He’s a playful and sassy little dude.

Likes: Learning to do what he’s afraid of and being loved on.
Dislikes: Anything he feels he can’t do and, until recently, fly spray. 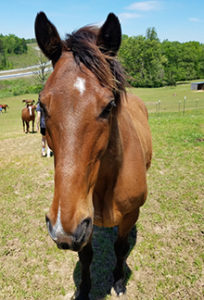 Levi is a golden bay Tennessee Walker. He’s a 10yr old gelding owned and beloved by Ms. Jayne Wilson. Levi is a bit bossy and can be hardheaded and a really good bluffer. He relies on those good looks to get him out of trouble with the students.

Likes: Scratches and being the center of attention.
Dislikes: Anything he can find to worry about. 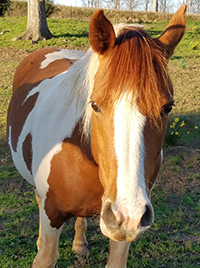 Lizzie is a 12 yr old paint mare. She is a half-sister to Rocky. Lizzie was trained by a teenager who donated her to offer her a place that could invest more time in her and give Lizzie the opportunity to work with lots of students.

Likes: Taking time to view any challenge before doing it. She’s opinionated and does best with good directions.
Dislikes: Rough handling and people who don’t take their time with her. 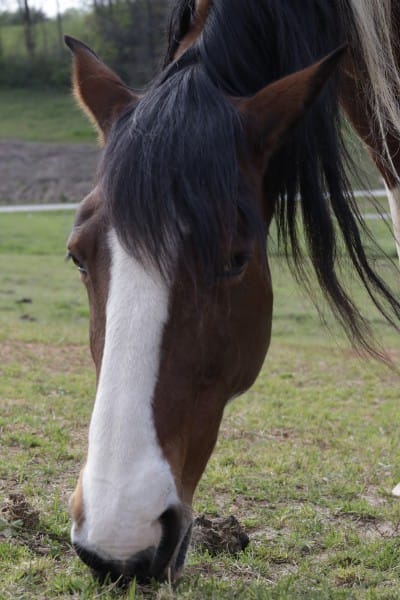 Lucy is a 14-year-old Spotted Saddle Horse mare and she’s the bay and white one. Lucy is known for her aloofness and difficulty in getting to know her. She can be a drama queen and is usually the horse our true equestrian students end up with by God’s grace. Lucy responds in dramatic fashion to any student who is too aggressive with her and she prefers distancing herself rather than dealing with silly things.

Likes: Being thoroughly groomed and relaxing by the trees; “her girls.”
Dislikes: Being chased when it’s not needed and not being heard. 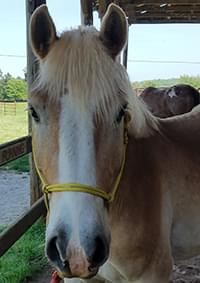 Pilot is a 7-year-old Halflinger. He is as sweet as the lemon meringue pie he resembles. He is also a new horse and as we learn more about him and his likes and dislikes we will update you! 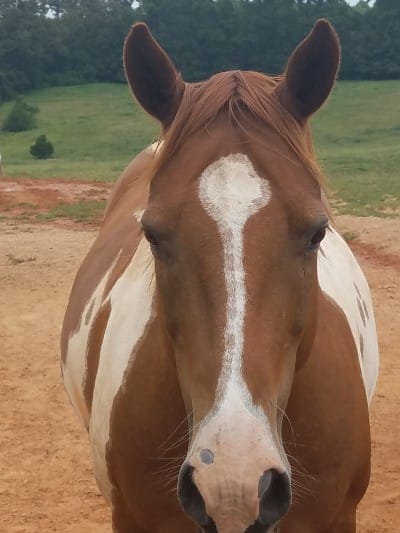 Rocky is a 12-year-old sorrel and white paint gelding. He belongs to Ms. Alexa Embry and was born at Shepherd’s Hill Academy. His mother was palomino Sunny who, after helping many students, passed away. Rockstar is known for being a bit difficult if you don’t step up and make him think (hence the nickname Rockstar). He is an athlete and very capable of playing games with his students. Get a handle on Rocky and you have accomplished much.

Likes: Making you work for his respect and having you understand what he needs to feel safe in your relationship; excellent for teaching boundaries to those without.
Dislikes: Being told to do things; refraining from herding his students around like cattle. 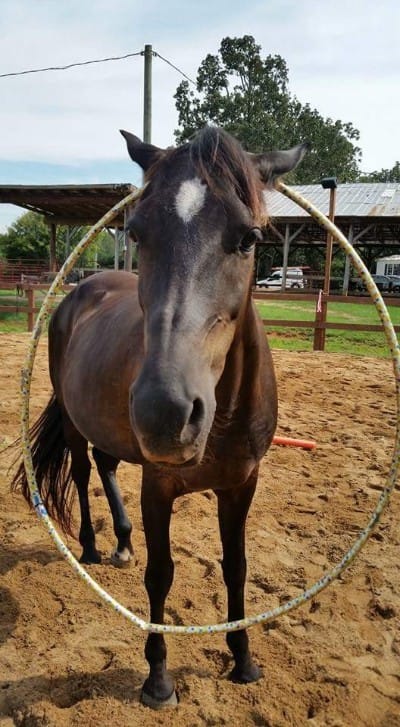 Tuscany (Tussy) is a black part Arabian mare around 18 years old. She was donated to our program after a career in the show ring and as a broodmare (mom mare). Tussy is equal parts attention and disinterest – if you aren’t interesting she’s not interested. She tries very hard to understand when her students put themselves out there and try themselves.

Likes: Praise and a good scratch; hanging out at the water cooler.
Dislikes: Doing all that non-show ring stuff for the first time and being scolded when she’s grumpy. 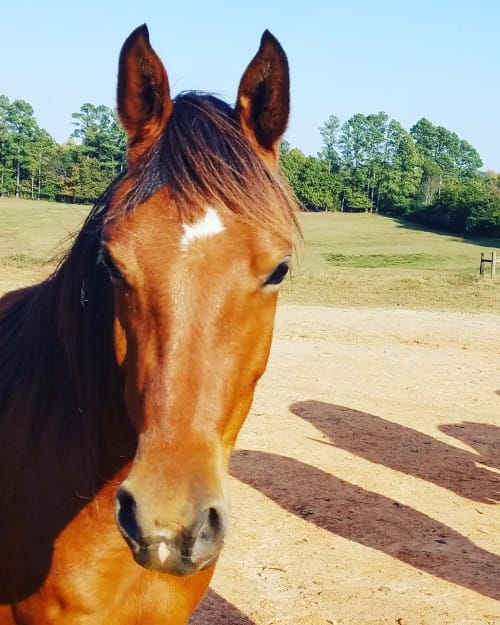 Valor is a part Arabian gelding. He is 3 years old and a golden bay color. Valor is Ms. Alexa Embry’s project horse and isn’t used in therapy yet. He was born on the farm to Mare Grace and his stepfather, Falcon, has helped raise him. A sassy, long-legged guy, he is self-assured and believes he’s the center of attention. He will pose for pictures and photobomb at any opportunity.

Likes: Being the center of attention.
Dislikes: Being away from his mama.

Zion is a 12 yr old; maybe older he doesn’t want to say. He is one of the newest horses and we are getting to know him. Stay tuned for updates on his likes and dislikes in the future.

The cost to feed and care for one of these horses is $1,150 per year. That is just over $95/month. As you get to know our horses, please consider a full or partial donation toward their sponsorship. Every gift, regardless of size, directly changes a teen’s life. These horses play a pivotal role in your teens’ growth and development as they learn more about the foundations of true and lasting relationships.

If you are not the parent of a current Shepherd’s Hill Academy student but would like to support us in our mission, both one-time and monthly donations are welcome and exceedingly appreciated. Click here to make a donation today.