In general, the problem with America’s youth culture is our kids are way too over stimulated with rights and privileges, while being way too under stimulated with responsibilities and obligations.  They have failed to attach reward to achievement; because, our politically correct culture has brainwashed them into thinking that “they deserve it” and “everyone’s a winner.” 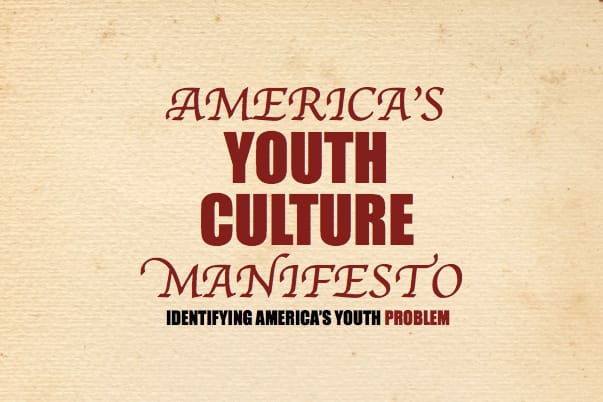 This results in our kids being cheated out of the character building experiences that are only learned by struggle, defeat, disappointment, and failure.

In today’s youth culture, teens have been abandoned by adults in certain areas of their lives, while being pampered, coddled, and entitled in other areas.  They’ve been allowed to make decisions based on emotion, feelings, and comfort as opposed to logic, reason, and a moral high-ground.  The bars of expectation for obedience, behavior etiquette, education, prudence, accomplishment, responsibility, excellence, character, and respect have all been lowered to the point that they can’t even respect themselves anymore.

Over Indulgence in Media

In general, the youth culture has been brainwashed by a 24/7 media, music, and entertainment barrage that teaches them nothing about moral purity and virtually everything about what parents don’t want them to know, believe, accept, or perpetuate themselves—everything our parents and the church once told us to avoid.

They’ve been pleasured into imbecility with all the electronics and techno-toys their parents have worked so hard to provide them—to the point that they have become insatiable and anhedonic.  They go like monkeys on a vine grabbing the next pleasure before releasing the last—leaving no margin in their lives to contemplated the deeper issues of life such as origin, meaning, morality, or destiny.

They’ve been allowed to blame others, while being bailed out of the sufferings and consequences of their own mistakes.  Relativism and postmodern thought have blinded them to the fact that they’ve even made mistakes in the first place—giving them no transcendent point of moral reference beyond their own subjective ideas, presuppositions and lusts.

Our youth have been cheated out of the security of knowing moral absolutes and the self-restraint of living within them.  They’ve been deprived of legitimate authority figures that will stand in the gap to enforce the few boundaries they’ve actually been given—the boundaries they need to adhere to in order to acquire the self-restraint needed to attain a healthy and sober sense of self-esteem and self-respect.

Our kids have no peace or rest in their souls; because they’ve been pursuing creation without regard or reverence for their Creator—unaware of  St. Augustine’s prayer, “Lord, You have made us for Yourself; and, our hearts are restless until we find our rest in You.”  In a nutshell, they don’t know God; and, they don’t feel they know anyone who truly does.

For a complete copy of “America’s Youth Culture Manifesto” by Trace Embry,  click here for your Free copy.